A French Island in the Mediterranean sea just off the south coast of France…close to Nice and just above its Italian neighbor Sardinia. They use the Euro and there’s about 330,000 of them…people not Euros. The main language is French, although they do have their own local dialect (Corsu), in fact I noticed all the road signs were either crossed out or riddled with bullet holes over the French writing…obviously there’s beef so maybe learning a couple of basic words in Corsu might win over the locals!

Two ways to get to Corsica…air or sea. I chose the sea and took the overnight ferry from Nice to Bastia which I think cost me about 80 euros back in February 2016…but its less hassle than packing your bike up in a frigging box for the plane and you get a nights accommodation out of it! There are also ferry’s from Marseille and Toulon (France), Sevona, Genoa, Livorno and Civitavecchia, (mainland Italy) and from Porto Torres and Santa Teresa Gallura (Sardinia).

Its a cycling paradise…its only a small Island so you could probably explore the whole thing on a bike in 2 weeks or see a good chunk in just a few days. The weather is great…maybe a bit cool in winter but nothing to cry about. Food is awesome, landscapes sweeeet and people are few and far between. I think this place has a little bit of something for everyone, mountain lovers, beach lovers, historians, cyclists, hikers, sea sportists!?! and even those people that like the finer things in life…you guys can fill your boots eating little fancy pieces of food, sitting in boutiquey little cafés wearing your boat shoes with sweaters draped around your shoulders whilst sipping wine overlooking some very fancy multi million pound yachts.

Why is it awesome?

The beauty of Corsica is the diversity of its terrain. It has over 1,000km of coastline, of which about a third are beautiful rugged beaches with the bluest water I have ever seen (with the exception of some of the Glacial lakes in Patagonia) and it also has some pretty big mountains, of which the tallest peak of Monte Cinto which is 2,706m, around twice the height of Ben Nevis (just to give some perspective). There are also 20 other summits of more than 2,000m so its a great place for cycling and hiking and its pretty wild too, except for the main settlements of Ajaccio, Bastia, Corte and Sartene the Island is pretty much uninhabited…not so many pesky people about!

The highest paved road on the Island takes you up to the Col de Veggio (1,471m) and you pass through the pretty impressive Spinluca gorge…so if you do fancy it id recommend you don’t miss out on that. I climbed in excess of 20,000 metres in 12 days so don’t go if you’re not willing to climb. In fairness whilst there isn’t much flat cycling on the island the gradients are pretty tame with not much over 10%.

No high rise buildings, no fast food chains, no motorways or other modern eye sores, just big stretches of unspoilt countryside. Wild camping (whilst probably not legal, I don’t actually know) is very easy and equally beautiful or if you prefer comfort I think there are a few campsites dotted about but these were closed when I was there out of season so its worth checking ahead if your not into the wild camping scene.

Great climate…I was there at the end of February and had sunshine and 20 degree days, maybe I was lucky but I would recommend visiting out of peak season (June, July & August) if you can as I  hear it gets pretty busy.

The food looked awesome but lets be honest…on my £7 a day budget I was merely a gastronomic spectator only able to admire from a far but in all honesty after a days cycling I was more than happy to find the prefect camp spot on the beach and fire up the camping stove whilst cooking my pasta watching the sun go down.

The small town of Bonifacio is one of my favourites in Europe…this secluded little town features an ancient citadel, narrow streets, colourful houses and passionate separatist locals who dream of independence. Home to only a few hundred people it is a great place to spend a few days and has some amazing views.

There’s always something to moan about…

Yeah so if I had to moan…the place is pretty expensive (its an Island, everything is imported…go figure), drivers are not always very cyclist friendly, they drive fast and can be impatient…except the truck drivers, they are pretty good and hmmm I cant think of anything else…oh actually some guys in a car wound down their window whilst passing me and threw a litre of water in my face…and not to cool me off…they were being arseholes. So yeah that wasn’t very nice but I’m not sure its a general qualm about Corsica…let me know if it happens to you…

A few more pics to inspire anyone tempted to visit… 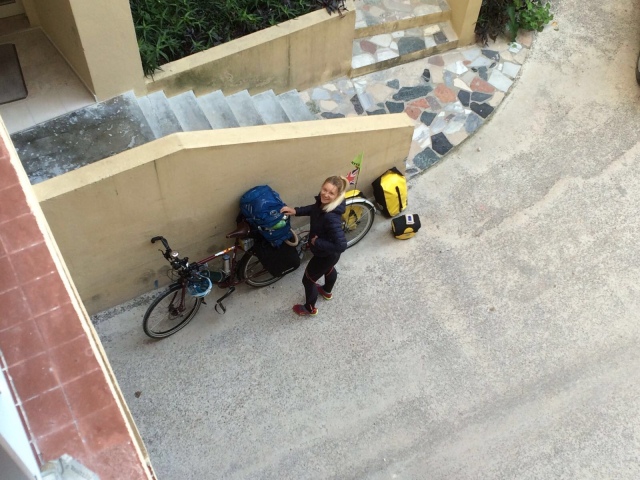